Months after the atomic bomb was dropped over Hiroshima, a small patch of red oleander flowers bloomed out of the irradiated rubble. Since then, red oleander has symbolized both the dangers of nuclear war and the hope of a more peaceful future. In a similar spirit, the Oleander Initiative gathers educators from communities around the world to work together and transform the lessons of Hiroshima into relevant and impactful peace education activities for their students.

The Oleander Initiative generates deep awareness of the catastrophic humanitarian impacts of nuclear weapons and equips participants with intellectual tools for conflict resolution and mutual understanding.

13 educators from 10 countries from the Middle East/ North Africa (MENA) region, the US and Japan spent a week together in Hiroshima with the mission to design educational projects that raise awareness of the humanitarian consequences of nuclear weapons.

The Oleander Initiative was implemented during August 2-9th, coinciding with the 71st anniversary of the atomic bombing of Hiroshima.

Following a night in Tokyo, the Oleander Initiative officially  began with an orientation session at the Hiroshima offices of the United Nations Institute for Training and Research (UNITAR).

Oleander participants met with the head of the UNITAR Hiroshima office, Mihoko Kumamoto and her staff who welcomed them to Hiroshima and gave a presentation entitled the “Rebuilding of Hiroshima.”

With a stunning view overlooking the Genbaku Dome and Hiroshima Peace Park, the UNITAR offices were the ideal location to convey the “power of place” at the heart of the Oleander Initiative. 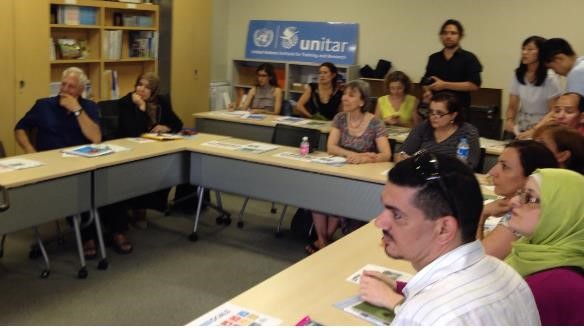 Oleander educators attended a Kagura performace after the orientation and experienced the first of many Japanese cultural activities in Hiroshima. To see the same performace as the participants, click HERE

Oleander participants had the opportunity to meet the actors and try on the Kagura costumes after the performance.

The first full day at the Oleander Initiative featured a morning lecture entitled “Facets of Hiroshima” by Prof. Ron Klein of Hiroshima Jogakuin University. Prof. Klein’s lecture provided an overview of the history and aftermath of the atomic bombing of Hiroshima and then focused on the constantly changing meanings associated with the city since the end of World War II. You can view Prof Klein’s powerpoint presentation by clicking HERE 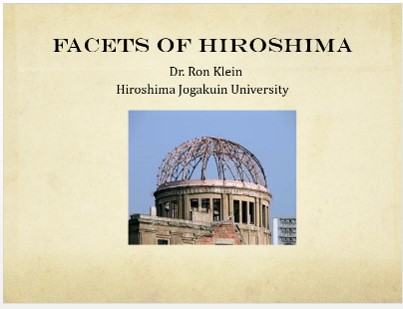 Perhaps the highlight of the Oleander Initiative was the powerful hibakusha testimony given by Mr. Horie Soh. 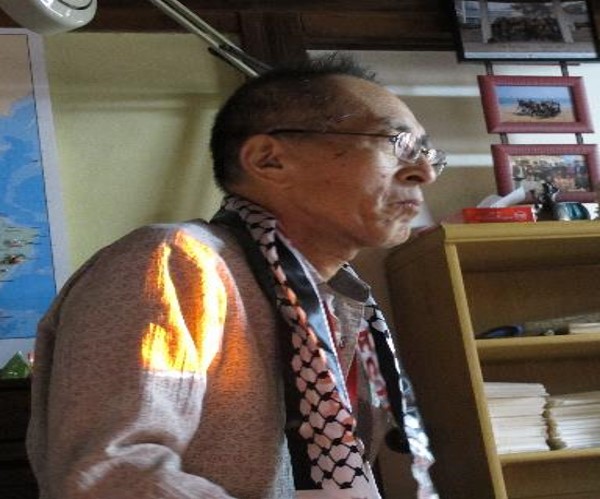 Soh-san was five years old and less than 1 1/2 miles from the hypocenter when the atomic bomb was dropped on Hiroshima. On that day, the atomic bomb blast blew him off his feet as he walked to school. Despite his proximity to the bomb, Soh -san remained unharmed because his elder sister protected him from the blast with her body. During his testimonial, he vividly described the terrible aftermath of the bomb – terribly burned children that sought shelter at his house and the many members of his family who succumbed to cancer, a likely result of the massive doses of radiation they absorbed. Soh-san is one of the very few surviving English – speaking hibakusha and we feel lucky and grateful that he shared his testimony with us at the Oleander Initiative.

Among the highlights of the Oleander Initiative were the many opportunities to interact with the Japanese students and teachers from Hiroshima. UME enjoyed a particularly close relationship with Jogakuin High School  whose students led a tour of Hiroshima Peace Park in English for the Oleander educators. 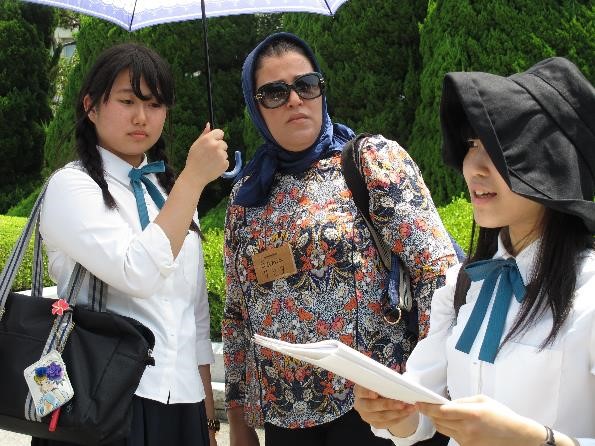 The guided tour by the Jogakuin high school students ended at the Honkawa Elementary School Museum. The Honkawa school was the school closest to the hypocenter of the Hiroshima atomic bomb.  Due to its reinforced concrete structure, the building survived the blast and currently serves as a museum that houses various artifacts and commemorates the over 400 students and teachers who lost their lives that day.

The relationships between the Oleander educators and Jogakuin students and teachers further deepened during our visit to their school on August 6th, the anniversary of the atomic bombing of Hiroshima. Approximately 350 teachers and students lost their lives during the atomic bombing in 1945. In order to honor these victims, Jogakuin High school implements an annual “Peace Forum” for students from throughout Japan, Asia and the US. 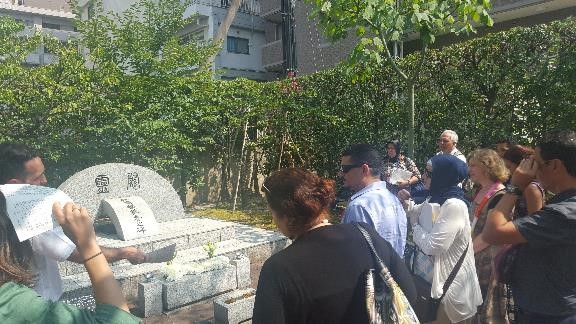 The students at the Jogakuin Peace Forum this year had the unique opportunity to meet with Oleander educators and engage in a rich cross-cultural session about the MENA region.
On August 6th, Oleander participants attended the Memorial Ceremony hosted by the City of Hiroshima that commemorated the 71st Anniversary of the atomic bombing of the city.

As part of the 50,000 attendees at the ceremony, Oleander participants were fortunate to be seated in one of the front lying seating areas with a clear view of the speakers. Speakers included Japanese Prime Minister Shinzo Abe, Hiroshima Mayor Kazumi Matsui and the UN High Representative for Disarmament Affairs. Following the ceremony, participants placed flowers at the Memorial Cenotaph that housed the names of all the victims of the atomic bombing.

That evening, participants took part in the floating lanturn ceremony at the Motoyasyu river.

While in Hiroshima, Oleander participants attended the Gensukiyo World Conference Against A + H Bombs . The World Conference includes nearly 10,000 attendees from over 50 countries and is the largest conference of its type. First established in 1955, it is credited as the venue that first gave voice to the hibakusha victims of the atomic bombs in Hiroshima and Nagasaki. Oleander participants attended various panels and discussion sessions focusing on nuclear disarmament and non-proliferation at the Conference between August 3-6.  Both Ray Matsumiya, UME’s Executive Director and Leila Ben Said, Oleander participant from Tunisia had a chance to address the conference attendees.

The groundbreaking nature of the Oleander Initiative generated tremendous excitement and support in Hiroshima and attracted both local and natonal media coverage in Japan. In addition to several regional newspapers, the Oleander Initiative was featured in the Yomiuri Shimbun, the largest national newspaper in Japan, and with a circulation of just under 10 millon readers, the largest circulated newspaper in the world. 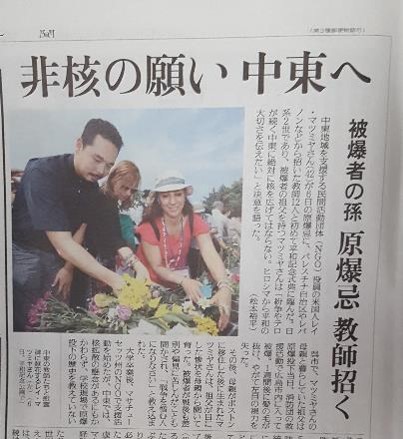 During the week long Oleander Initiative, participants continually modified and refined Hiroshima themed educational projects for the students in their home communities. 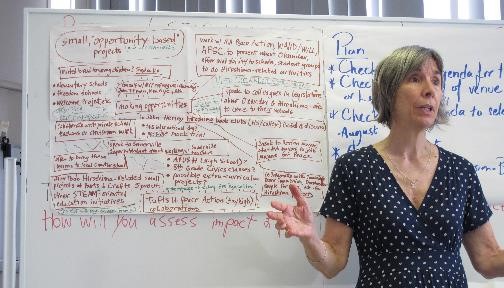 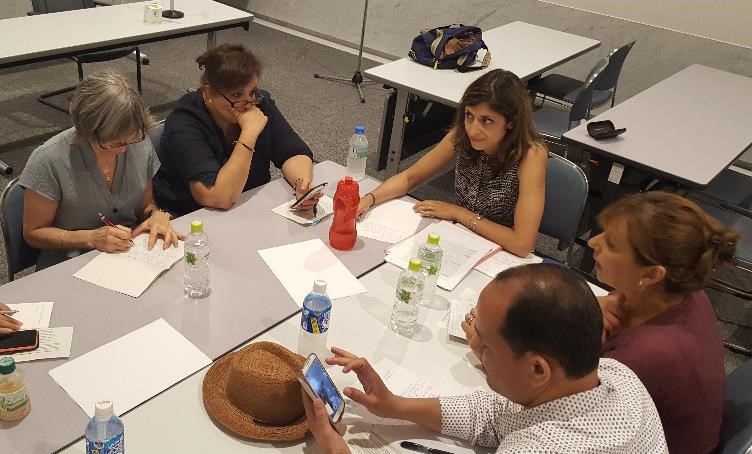 Thanks to the generosity of the City of Hiroshima, Oleander participants had the opportunity to work on their projects in donated classroom space located within the Hiroshima Peace Museum.  The powerful, tragic artifacts and displays at the Hiroshima Peace Museum further added to the “power of place” of the Oleander Initiative and gave the participants additional impetus for their important work to promote awareness about the terrible humanitarian impacts of nuclear weapons.

Mr. Yasuyoshi Komizo, Chairman of the Hiroshima Peace Culture Foundation , a body under the auspices of the CIty of Hiroshima paid the Oleander Initiative a visit on the last day of the program. Mr. Komizo was the former Ambassador of Japan to Kuwait, as well as the Special Assistant to IAEA Director General Mohammed El Baradei. Mr. Komizo stressed the importance of the Oleander participants’ work, the great value of cultural exchanges and engaged in a lengthy question and answer session with the participants.

Many thanks to the Otterman Foundation, Japan Foundation, Shinfujin Womens Association, Sasakawa Peace Foundation, Hiroshima Peace Cultural Foundation, the Samuel Rubin Foundation, and the City of Hiroshima for making this program possible. Special thanks to our Academic Co-Directors Galia and Liz, as well as Michelle, our project specialist for all their support and expertise. Lastly, a big thank you to our program coordiantors Rie and Era who successfully navigated the incredibily similar but vastly different Japanese and MENA cultures with empathy, humor and grace.
All of us at UME are tremendously excited by the success of this inaugural program and are looking forward to increasing the number of days, the number of participants and adding a visit to the city of Nagasaki in 2017.

Please contact me at RayMat@ume.org if you have any questions or would like additional information about the Oleander Initaitive.
Sincerely,
Ray Matsumiya
Executive Director
PrevPreviousJapanese Press Coverage
NextOleander Train the Trainer Workshop in CasablancaNext

This site uses Akismet to reduce spam. Learn how your comment data is processed.